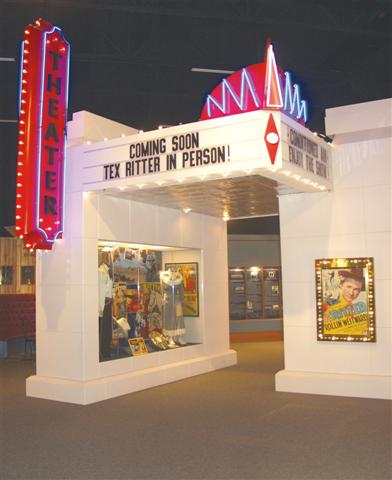 The Texas Country Music Hall of Fame/Tex Ritter Museum opened in August 2002 in a $2.5 million state-of-the-art facility. Since that date, over 30,000 country music fans have stepped back in time to re-live great moments in country music history.

Fans have come from every state as well as numerous foreign countries including England, Scotland, Ireland, Denmark, Canada, India, Sri Lanka, The Netherlands, Germany and Australia.

The museum started in 1993 as the Tex Ritter Museum and expanded to include friends of Tex and other Texas-born country music legends. In August 2004, the museum expanded to add a significant Jim Reeves display which features the radio equipment from Jim's radio station KGRI in Henderson.

Maurice Woodward Ritter was born on January 12, 1905, the youngest of six children born toJames Everett and Elizabeth Matthews Ritter, ranchers in Murvaul, Texas. His family later moved to Nederland, Texas, ten miles from Beaumont, where he studied voice, trumpet, and guitar as a teenager. He graduated with honors from a Beaumont, Texas, high school in 1922, and enrolled at the University of Texas, in Austin, to study law.

Tex Ritter landad a featured role in the Broadway play, Green Grow the Lilacs, in 1931. The cast began calling him "Tex" because of his accent and the name stuck with him.